The foundational idea of Tubular is that explicit physical simulation is preferable to implicit modeling (amp profilers, neural nets.) These approaches always involve a certain amount of guesswork, interpolation, and shoehorning a real amp into the structures that the simulator understands.

Tubular is Mod Sound's best effort to capture every sonic behavior of guitar amplifiers from the ground up - networks of resistors, capacitors, inductors, tubes, and transformers are solved in full detail for every audio sample. This allows us to approach perfect emulation of circuit behaviors for all input signals, in all knob positions, across all operating conditions.

Tubular is based on the physical simulation approach of Wave Digital Filters. WDFs transform passive electronic filter designs into full-detail digital simulations. Coupled with some more traditional nonlinear circuit simulation techniques, they enable complete simulations to be generated directly from schematics, capturing all relevant electrical behaviors of an amplifier. This approach is very time-efficient, allowing many amplifiers to be modeled in full fidelity in a short time.

If you want to read more about the theory behind Wave Digital Filters, see this academic paper about simulating a Bassman preamp section. As of this writing, the academic literature has not evolved much past this paper - we at Mod Sound have had to solve several hard engineering problems to turn the theory into useful practice. We're pretty sure that no other commercial amp simulator uses WDFs, probably because of these hard problems. 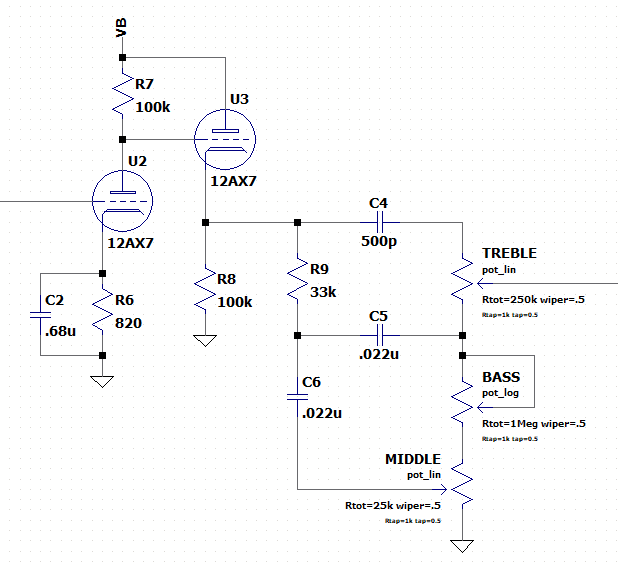 WDFs allow simulations to be generated from circuit schematics, but there is still some nuance in deciding what schematics should be drawn in the first place. Tubular's amp models include every part of the circuit that we have determined to be relevant to the audio signal path.

The direct audio signal path typically flows from the input jack, through the preamp triode gain stages and tonestack, possibly through an effects loop circuit, then into the dual-triode phase inverter, into the power tubes, through the output transformer, into the reactive speaker equivalent circuit. After the speaker's loading characteristics have been applied, the electrical output signal can be tapped, and fed into the next stage of processing (the speaker cabinet model, described below.)

However, the direct audio path is not the only relevant part of the amplifier. When a push-pull power amplifier tries to output a loud signal, its instantaneous current draw increases dramatically, which puts a much heavier load on the power supply filter circuit. The musical result of this phenomenon is a sort of compression, whose time constants depend on the filter component values. In a Plexi-style circuit, it tends to make notes sound snappier, as the initial picking transient plays at full volume, and the rest of the note is compressed. Tweed-style circuits generally respond slower, with a perceivable drop in volume as a note is held.

For computational efficiency reasons, the amp models in Tubular are split up into multiple subcircuits. Extreme care is taken to ensure that all nonlinear loading effects are preserved, even overlapping some preamp tubes in some cases.

Each (push-pull) poweramp circuit includes the phase inverter, power tubes, output transformer, reactive speaker equivalent circuit, global negative feedback circuit with proper filtering, and the power supply circuit. Because of the negative feedback loop, all of these parts interact with each other to contribute to the circuit dynamics.

For several reasons, speaker cabinet simulation requires a completely different approach. To a good approximation, a speaker-cabinet-microphone-room system is just an EQ curve, albeit a very complicated one. Tubular allows the user to modify many cabinet parameters independently, and immediately see the effects of the knob-turning on the final output curve of the simulation. Tubular offers independent control over the speaker type, cabinet type, microphone type, microphone position, and room characteristics.

Most amp simulators use recorded impulse responses (IRs) to simulate the entire speaker, cabinet, room, and microphone system. This has some advantages - it is easy to characterize the entire system with great accuracy - but also has significant limitations. Recording the impulse responses is labor-intensive and requires access to all of the physical equipment that you would want to model. More importantly, however, an IR is inflexible. There is no way to swap out a speaker or even move a microphone in a recorded IR. If you want to offer the same IR with a swapped-out speaker, you have to actually go swap out the speaker in real life and record a new IR. The best IR cabinet simulators use hundreds of impulses that can be interpolated to modify these parameters, but this is still a fundamentally limited approach.

Tubular's cab simulation also uses IRs, but in a much different way. Tubular runs IRs to simulate the speaker and microphone individually, applies an EQ curve derived from real-world cabinet response measurements, then physically simulates the propagation of sound inside the cabinet and room. Finally, the user can control the parameters of several EQ sections to modify the response to their taste.

Speakers themselves cannot be physically simulated in real-time with currently-known techniques - there are just too many relevant phenomena across multiple domains. They have electrical, magnetic, and mechanical characteristics; waves travel across the speaker cone in 3D space; subtle material properties become relevant. Therefore, Tubular uses convolution with speaker impulse responses at the root of its cabinet simulation.

However, much of the rest of the setup can be physically simulated. We took what we learned from Velvetverb and applied it to sound waves bouncing around inside guitar cabinets and around the room before reaching a microphone.

All distortion-type effects are drawn as circuit schematics and simulated in the exact same way as the amps - just with diode, transistor, and opamp models instead of tubes. 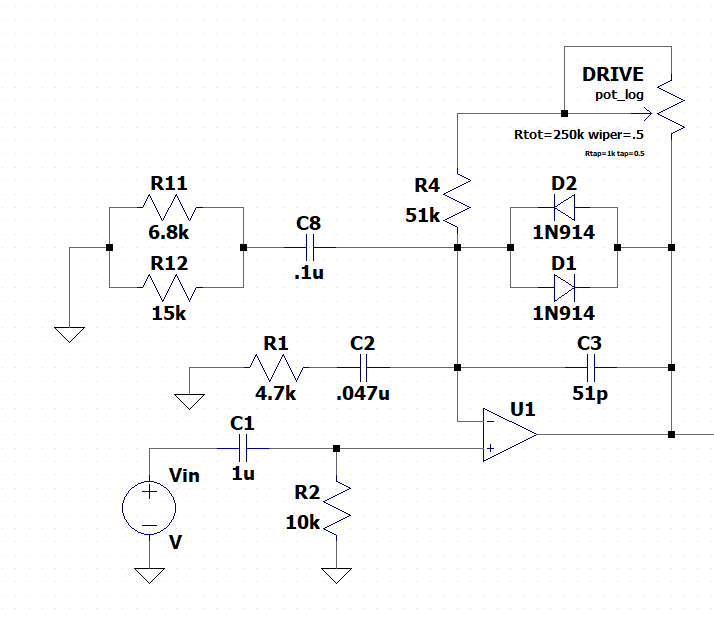 Other effects are typically standard DSP implementations. There is no real reason to do physical simulation of e.g. a phaser pedal, because the circuits operate in linear regions and can be fully imitated with conventional digital techniques at much lower CPU cost.

The reverb algorithms in Tubular are taken directly from Velvetverb - these reverbs are specifically designed to take a mono input signal and spread it around the stereo field, which is ideal for the mono signal coming out of a guitar amp under most circumstances.